Timing Is Everything (Just Ask the Dinosaurs): Final Timing Rules on Reg. J and ACH 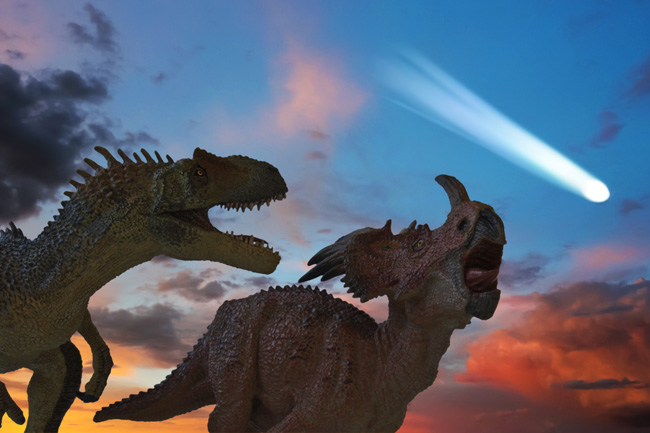 Effective Date: July 23, 2015 for the Reg. J and policy changes and for the policy changes related to the posting and debiting of check and ACH transactions to financial institutions’ accounts and December 5, 2014 for the policy revisions to the principles for establishing future posting procedures for same-day ACH service and services for U.S. branches and agencies of foreign banking organizations.

Did you know that, had the timing been different, dinosaurs might have survived the asteroid that eliminated their species? Or so says a paleontologist from Edinburgh University, Steve Brusatte. Brusatte believes that the asteroid hit “at a bad time,” and that if the asteroid “had hit a few million years earlier, or a few million years later, then dinosaurs probably wouldn’t have gone extinct” (source).
If the asteroid hadn’t hit, you and I might not be here. Bad news for dinosaurs; good news for us.
Clearly, timing is everything. The Federal Reserve Board agrees and has taken two actions that affect the timing of check settlements. The first action is a final rule that amends Subpart A of Regulation J. Regulation J governs the collection of checks and other items by the Federal Reserve Banks, the handling of returned checks and the transfer of funds through Fedwire. In the second action, the Fed has adopted revisions to Part II of its policy on payment systems risk (PSR policy) that defines the procedures for measuring balances intraday in the accounts that institutions maintain at Federal Reserve Banks.

In conjunction with the changes to Reg. J, the Federal Reserve Board has revised the procedures contained in this circular for measuring balances intraday in the accounts institutions hold at Federal Reserve Banks. Specifically, the changes relate to the Board’s procedures for posting debit and credit entries to institutions’ accounts for automated clearing (ACH) debit transactions and check transactions.
Some of the changes to the Fed’s procedures took effect immediately on December 5, 2014. These changes represent a set of principles for establishing future posting procedures for the Fed’s same-day ACH service and some clarifications related to the administration of its policy for U.S. branches and agencies of foreign banking organizations. These principles are:

In conjunction with the Reg. J changes, on July 23, 2015, the posting times for commercial check transactions at the Federal Reserve Banks will be 8:30 am EST, 1:00 pm EST and 5:30 pm EST with specific posting times depending on when a check is deposited with the Federal Reserve Bank (for credit) or presented by the Federal Reserve Bank (for debit). Credits received by the deadlines will post on a rolling basis at the next available posting time at least 30 minutes after receipt by the Federal Reserve Bank. In the same vein, debits associate with electronic check transmission will post on a rolling basis at the next available posting time that is at least 30 minutes after presentment to the paying bank. Paper checks will post at the final posting time of 5:30 pm EST on the day the paper check is presented to the paying bank.
In addition, the Federal Reserve Banks will present multiple electronic cash letters per day to financial institutions with the first presentment by 8:00 am EST for settlement at 8:30 am EST. Settlement for large-value check corrections and adjustments will begin at 8:30 am EST and hourly thereafter on the half-hour depending on when the discrepancy is detected. Large-value debit corrections will be posted after the close of the Fedwire Funds Service, the same day as the large-value debit adjustments are posted.
Unlike the dinosaurs, noncompliant timing on these amendments probably won’t spell extinction for our species. However, to ensure the continued survival of your institution, compliance is always the best option.
To review the new rule and policy statement, please see:
https://www.federalregister.gov/articles/2014/12/05/2014-28516/collection-of-checks-and-other-items-by-federal-reserve-banks-and-funds-transfers-through-fedwire
https://www.federalregister.gov/articles/2014/12/05/2014-28664/federal-reserve-policy-on-payment-system-risk-procedures-for-measuring-daylight-overdrafts

Jane Pannier is senior vice president and in-house counsel for AffirmX LLC, a developer of an innovative remote compliance review solution. Ms. Pannier is also SVP of AdvisX, a CUSO that specializes in using technology to more effectively deliver consulting services to financial institutions.
By Jane Pannier|2015-02-02T21:30:30-05:00February 2nd, 2015|Blog, Compliance Tips|Comments Off on Timing Is Everything (Just Ask the Dinosaurs): Final Timing Rules on Reg. J and ACH