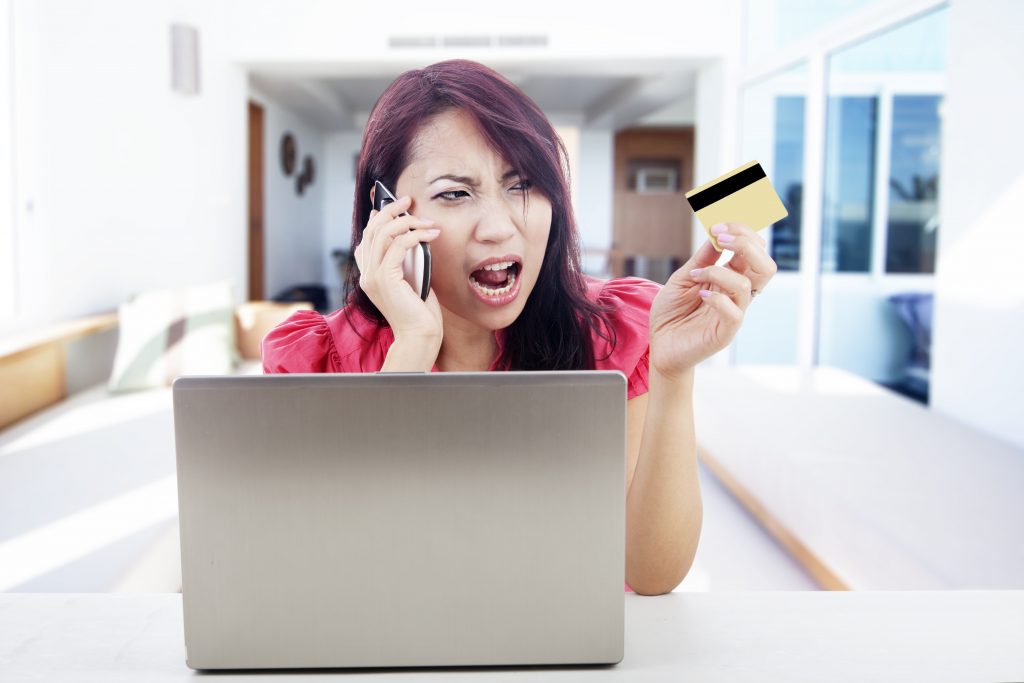 Most people generally don’t like a complainer. It’s not pleasant to have someone point out the bad in every situation. But there are times when complaining can accomplish some good. For example, while it may not be very enjoyable to have to respond to an angry customer, looking at complaints your institution has received can pinpoint areas that need attention.
This was the idea behind the CFPB’s Consumer Complaint portal launched in July of 2011. Since its release, the database has received more than one million complaints covering an ever-expanding list of areas of discontent. The bureau forwards complaints to the respective companies for their response, and about 700,000 complaints have reportedly received a response from the companies named in the complaint. A review of the Bureau’s complaint portal reveals key issues that could impact your financial institution, such as what areas are covered by the CFPB and what type of complaints might carry greater weight.
When we’re talking about complaints in the CFPB’s portal what we’re really looking at is a wide range of products, sub-products and specific issues. There are currently 12 products and services reflected in the CFPB’s database, as seen here: 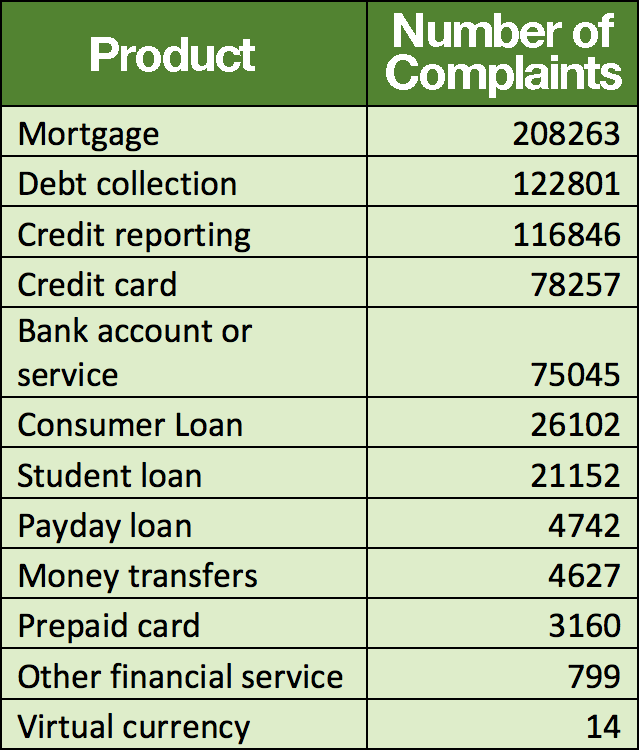 Naturally, you would expect to see loan-products such as mortgage loans, payday loans, and vehicle loans or leases, but you’ll also notice products and services such as bank accounts, debt collection and credit reporting as well as the emerging product segment of virtual currency. For each of these products, several sub-products are presented. For example, the sub-product elements of mortgage loans include Conventional Adjustable Rate Mortgages or ARMs, conventional fixed-rate mortgages, FHA, VA, Home equity lines of credit, as well as other less utilized, but still significant sub-products like reverse mortgage.
However, the really interesting aspect of the database is the list of issues. A review of the current database reflects 95 issues from account opening/closing to wrong amount charged or received. Credit cards contained the most divergent number of issues at 33, but it’s the mortgage issue of Loan Modification, Collection and Foreclosures—representing more than 105,000 complaints—that is the most-cited. Take a look at the top eleven issues and their numbers: 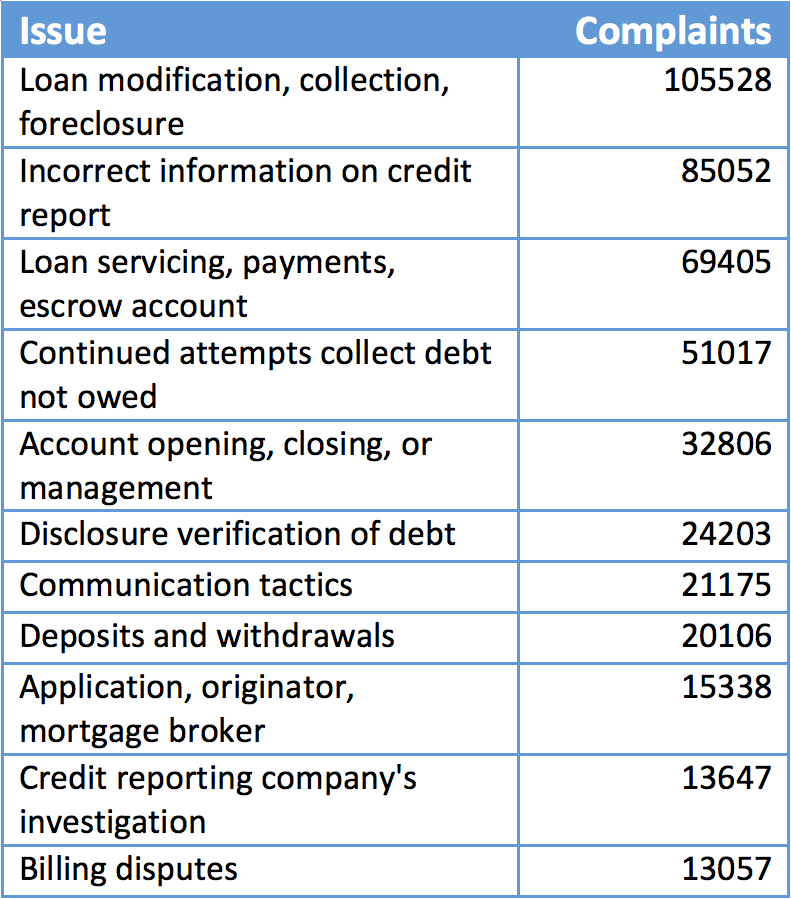 As you can see, these complaints cover a broad array of elements for financial institutions with a heavy emphasis on the lending side, where we observe issues from loan application to credit reporting, and from billing disputes to a significant concentration of debt collection efforts. But there are other issues related to deposit accounts that include account opening issues as well as deposits and withdrawals.
There are a few other points of interest as well. Advertisements, while not in the top-10 complaint category, still merit consideration with 2,620 related complaints. On the other hand, you might have expected fraud or scams to be higher on the list, but this area only received 2,521 complaints through 2016.
Of the nearly 4,000 companies listed in the database, most are the big names you’d expect to be there, like the big banks, credit card companies and the big three credit reporting agencies. However, there are some entities represented that might surprise you, such as law firms, mortgage brokers, and loan processors. 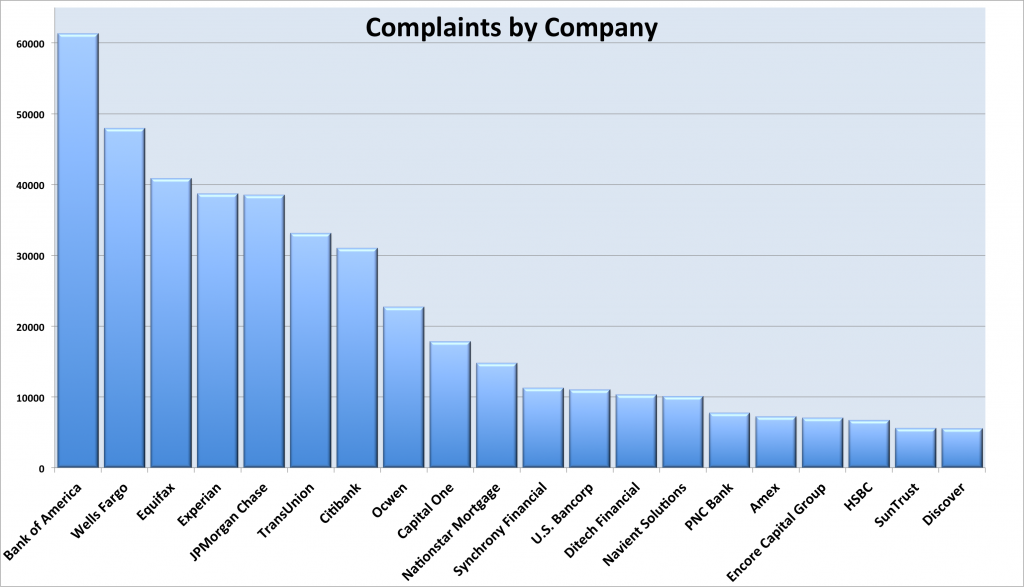 But it’s not just the big institutions that receive complaints. If your institution receives a complaint, you are expected to respond to the complaint within 15 days unless the complaint is related to a complex matter. Responses to complaints are generally not shown on the CFPB’s database, other than to note that the response has been made. However, while the issue of response is one factor, the question of impact is yet another. We’ll look more into that in Part 2.